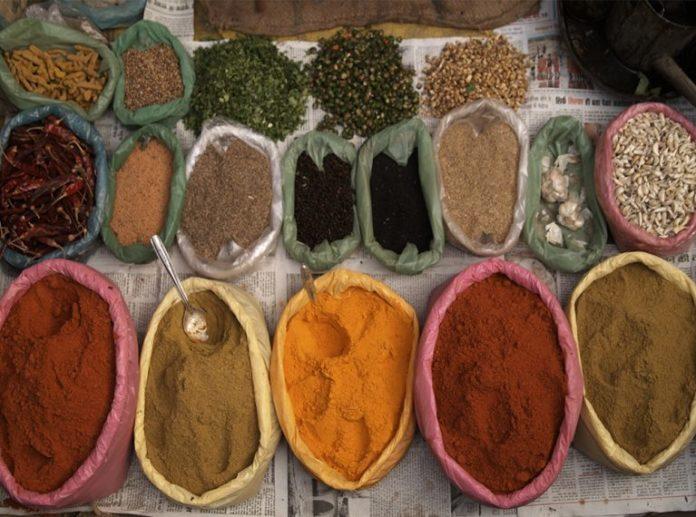 Indian spices have exquisite aroma, texture and taste to enhance the flavour of everyday dishes.

India is the largest producer and consumer of spices in the world. India is called the ‘Land of spices’ and Indian spices are fascinating condiments known for their aroma, texture and delectable taste. India has a plethora of spices – ground, powdered, dried, soaked – and spice-enriched flavours are integral to the multicuisine culture of India since they magically transform a simple culinary preparation into something more and extra tasty delicacy. International Standardization Organisation (ISO) lists 109 varieties of species of which India alone produces around 75 varieties. India possesses varying climatic conditions spanned in its different regions which enable cultivation of different types of species on an estimated 3.21 million hectares of land.

Not only does every spice add a unique taste by completing a dish but many of these common Indian spices also have health benefits associated with them.

Turmeric (Haldi in Hindi) is an underground stem of a ginger-like plant and once available it is yellow and in fine powder form. Turmeric is called the golden spice of India and is synonymous with the unique yellow colour which appears in rice and curries as it used as both a condiment for flavour and culinary dye. The flavour is mildly aromatic with hints of orange or ginger. It has anti-inflammatory, antibacterial and antiseptic properties and is commonly used as a natural painkiller and healer.

Black Pepper (Kali mirch) called as the “king of spices” comes from the pepper plant in the form of small round berries which grown after about three to four years of plantation. It is a very popular, slightly pungent flavoured spice and is used for garnishing just about anything from eggs to sandwiches to soups to sauces. It is also a very beneficial spice which helps in fighting cough, cold and muscle pain. Black pepper has diuretic properties and helps in the sweating process of the body thus getting rid of harmful toxins.

Cardamom (Green choti Elaichi) is a whole or ground dried fruit, or seeds, of Elettaria cardamom of the ginger family. It is called as the “queen of spices” owing to its extremely pleasant aroma and taste (spicy sweet) and is primarily used for adding a distinct flavour to Indian desserts like Kheer and is thus extensively used in baked goods and confectioneries. It is also the most famous and popular ingredient added to staple India tea which is common in households across the country. Nothing like ‘tea with a hint of cardamom! It is said to be good in controlling bad breath and very commonly used as mouth refresher. Its also used for curing digestive disorders like acidity, gas and flatulence.

Black Cardamom (Kali Elaichi) is another member of the ginger family and a close relative of green cardamom. Black cardamom It is used to add subtle flavour – spicy and citric – to rice and is mostly used for dishes which take long to cook, to be able to get the intense but not an overwhelming flavour associated with it. A very versatile condiment, it is thought to help in tackling digestive and repository problems. It is also highly recommended for dental health like teeth and gum infections.

Clove (Laung) are the dried flower buds from the clove tree (Myrtaceae, Syzygium aromaticum). It is a very popular spice used in soups, stews, meats, sauces, and rice dishes in India and other parts of South Asia. It has a very strong and sweet, mainly pungent taste with bitter overtones. It has also been used for different dental problems like tooth ache and sore gums since ancient times in India. Clove is highly recommended for cold and cough and generally added to tea as a therapeutic. It’s the most famed constituents of the world famous Indian ‘masala chai’ or spice tea.

Cumin seeds (Zeera) of a leafy plant cumin is used for its aromatic odour for adding strong punchy flavours to dishes like rice and curries. It can be used a raw or roasted for reducing the overwhelming flavour. The main flavour it adds is peppery with little citrus overtones. Cumin seeds are an excellent source of iron and thus are good for people when they suffer from iron deficiency. It is also said to be very beneficial for our immunity and has anti-fungal and laxative properties.

Asafoetida (Hing) is a resin extracted from the plant Ferula asafoetida by making a slit in the plant’s bark. In India, it is commonly used for seasoning certain dishes like curries and lentils and has a strong pungent smell. It is very beneficial in treating cough, digestive disorders and respiratory problems. Hing is also an opium antidote and is generally given to someone addicted to opium.

Cinnamon (Dalchini) is the world’s most popular spice after black pepper and it comes from the branches of trees of the “Cinnamomum” family. It has a very unique flavour – sweet and spicy – and fragrance due to the oily portion of the tree that it grows from. It is added to various dishes and also to coffee for that extra flavour. Cinnamon is known to have widespread medical benefits and is used for treatment of diabetes, cold and low blood circulation.

Mustard (Rye) is a condiment derived from the seeds of the mustard plant. Mustard is extremely rich in omega-3 fatty acids, zinc, calcium, iron, vitamins B-complex and vitamin E. Mustard is one of universal condiments commonly used in pairing with meats, chesses, sauces, dressings etc and its taste shows huge range from sweet to spicy. Because of the rich constituents of mustard, it helps in bone and teeth strength and in performing metabolism efficiently.

Red Chilli (Lal mirch), the dried ripe fruit of the genus Capsicumis is the hottest of species and adds a very strong hot flavour to a food item or dish like curries. It contains the crucial Beta carotene which has a beneficial antioxidant effect on the body.

Export of Indian spices to the world is a formidable industry with a turnover of $3 billion with prominent customers being US, followed by China, Vietnam, UAE etc. The Spices Board of India is responsible for promoting Indian spices worldwide by providing quality control and certification. The Indian spice community is now very advanced and involves technology, better quality control, driven by market requirements and highly consumer-centric. Spice production, consumption and export is growing steadily in India is also now going the organic way.

“Merry Christmas! Wishing our Readers all the happiness in the world.”