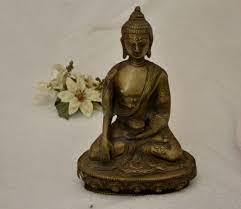 A miniature 12th century Buddha statue which was stolen from a museum in India over five decades ago has been returned back to the country.

This is the story of an interesting ‘return’ to take place in the art world. A 12th century statue of Buddha was recently returned by Britain to India after it was spotted and identified by Lynda Albertson (a member of Association for Research in Crime against Art (ARCA)) and Vijay Kumar (from the India Pride Project) when visiting a trade fair in the United Kingdom. After their report the British police handed this statue to the Indian High Commission in London.

This Buddha statue made of bronze with silver decoration on it was recognized by Archaeological survey of India (ASI), the government owned organization responsible for archeological research and conservation and preservation of historical monuments in the country.

ASI stated that this statue was stolen in 1961 from a museum in Nalanda in Bihar in northern India. This statue changed several hands before arriving in London for sale. UK police informed that various dealers and owners who had the statue were unaware that it was stolen from India and so they rightfully cooperated with the police’s Art and Antiques Unit for the investigation and subsequent return.

Almost 57 years ago, around 16 priceless bronze statues went missing from Nalanda in Bihar in India. Each of these statues were an outstanding work of art. This particular statue depicted Buddha sitting in bhumisparsha mudra (earth-touching gesture) and was six-and-half inches long.

Vijay Kumar of the India Pride Project was conducting investigation on this missing piece. He belongs to Chennai though currently he works in Singapore as a general manager. While the missing object investigation was going on, Vijay Kumar had several conversations with Sachindra S Biswas, the former director general of ASI. At the time, Kumar didn’t have evidence for it. He says that most museums in western countries require photographic proof of antiquities stolen from their collection, while ASI was not very good at keeping photographic records. Fortunately for Kumar, Biswas had kept few photographs of some of the statues in 1961 and 1962 along with their detailed descriptions. Based upon these details Kumar then decided to keep an eye out for the 16 stolen items in the international art market.

Coincidentally, few years ago Lynda Albertson (of ARCA) and Kumar had collaborated on few projects and were well acquainted with each other. So, when Albertson informed about her visit to The European Fine Arts Fair, Kumar accompanied her. At the Fair, as Kumar discovered that the statue was incorrectly listed as belonging to the 7th century instead of 12th. He then compared the photographs with those provided by Biswas and concluded that it was the same piece apart from few modifications and restorations which were done on it.

Albertson contacted the head of Art and Antiques Unit of the Netherlands National Police Force as well as Interpol for supporting evidence while Kumar alerted the ASI in India. However, it took few days for the two of them to convince relevant authorities and one worry was that The European Fine Arts Fair was coming to an end. To prevent further sale of Buddha’s statue, Dutch police contacted the dealer on the concluding day of the trade fair. The dealer informed the police that the firm was selling the piece on consignment, its current owner was not in Netherlands and the dealer planned to take the statue back to London if the piece remained unsold.

While the statue was being taken back to London, Albertson and Kumar passed on the important and necessary documents to Constable Sophie Hayes of New Scotland Yard’s Art and Antiques Unit. Meanwhile, the current Director General of ASI Usha Sharma wrote a letter to the Indian High Commission in London apprising them of the situation. The dealer asked them a proper identification of the piece and for which the documents were provided which matched the points of similarity between this piece and the photographs of the original. The dealer was still adamant that there were around 10 points where the statue did not match the one from ASI records.

For due diligence, Constable Hayes contacted the International Council of Museums (ICOM) which then arranged for a neutral expert to study the statue closely. This expert took few months to carefully examine the piece before ICOM sent a report validating Kumar’s and Albertson’s claims. The bronze was made by the cire perdue or “lost wax” process. This means that the wax model for the piece was used only once making the statue a stand-alone piece. Once this was established, it was observed that the same damaged location was seen in this statue as was noted in the ASI’s record. The report concurred with ASI’s description of the bronze’s discoloration due to burning.

Among other points of similarity, the clincher was the disproportionately large right hand of Buddha touching the earth, making this statue a very unique piece. Thus, the owner and dealer were asked to give up the piece and they agreed to hand it over. This particular case is a good example of collaboration and cooperation between law enforcement, scholars and traders and maintaining cultural diplomacy between India and United Kingdom. Most credit goes to Kumar and Albertson for their diligence in recognizing that the missing piece has been located after all these years.

Once the statue is received by India, it will definitely be placed in Nalanda Museum. Nalanda has a special historical connection to Buddhism. It is also the place where the oldest university of the world – Nalanda University – stands where scholars and intellectuals converged in 5th century BC. This place also saw Buddha giving public talks and sermons. Valuable artifacts and stones have been looted from India for centuries and now they are travel through the smuggling channels. This is hopeful and exciting news and all the people involved who have enabled this successful finding and return. They all feel delighted to be able to facilitate the return of this important piece of Indian heritage.

Sharad Yadav passes away at 75