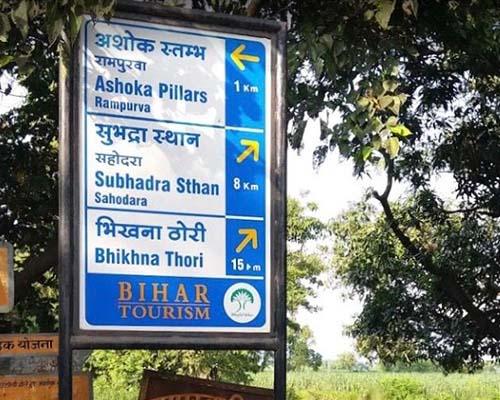 From India’s emblem to national pride stories, Indians owe a lot to Ashoka the great. What Emperor Ashoka would think of his descendent modern-day Indian ruler politicians, if he were to time travel now to Rampurwā (or Rampurva) in Champaran, the nondescript, desolate village at the bank of the Anoma River that he had judged to be uniquely sacred and significant about 2275 years ago? This is the only site in the world to have two Ashokan Pillars with Bull and Lion Capitals that the Emperor Ashok installed to commemorate ‘’Buddha embarking on the path of search of knowledge’’ ; this is where Buddha, upon reaching the bank of Anoma River after leaving behind his family had exchanged his royal robes for an ascetic’s dress and chopped off his elegant hair locks. Possibly, the Emperor would have thought kindly of the young archaeologist Carlleyle to have imagined of the ancient royal highway from Pataliputra to the Nepal valley to discover the Rampurwā site about 150 years ago adjacent to this now invisible highway; and perhaps, he would have gone into silence to know that Rampurwā lion capital fell and broke into two pieces in the unsafe custody of Indian Museum in Kolkata in 2013. And, perhaps as the tallest ancestor in the Indian political history, he would have expected his descendent Indian ruler politicians to respect his feelings towards the site of Rampurwā , to reverse the momentous neglect of this civilisation milestone, to return back both Rampurwā Bull and Lion Capitals to the original site and to restore the glory and magnificence of the sacred site as conceived by him in the 20th year of his reign.

If you happen to visit Rashtrapati Bhavan in New Delhi (known formerly as Viceroy Lodge during British time), the official residence of the president of India you are likely to notice the magnificent third century B.C. sandstone capital of the Ashokan Pillar known as the Rampurva Bull1 mounted on a pedestal between the central pillars at the forecourt entrance of the Rashtrapati Bhavan. An important part of Indian antiquity2, the Rampurva Bull Capital was discovered 144 years ago by a British archaeologist A. C. L. Carlleyle in 1876 in a nondescript village called Rampurva in Gaunaha block in Narkatiganj sub-division of West Champaran District of Bihar3.

Carlleyle had conducted extensive archaeological explorations of sites in and around Champaran during 1875-80. He was in Laoriya, when some tharus from terai came down to him to inform him of a site in the north with a stone sticking in the ground which was called locally as Bhim’s Lat, and which they said resembled the top or capital of the pillar at Laoriya. Carlleyle at once suspected this to be a portion of another pillar and made immediate arrangement for exploration of the spot. Upon reaching the village Rampurwā or Rampurva in terai, he did find the upper portion of the capital of a pillar similar to that of Laoriya one sticking out of the ground in the slanting position near the eastern bank of a small river called the Hariora or Haribora Nadi,

In his report first published in 1885, Carlleyle wrote …’’discovery of another inscribed pillar of Asoka at Rampurwā in the Tarai, at the foot of the Nepal hills, 32 miles to the north of Betiya. The inscription is letter for letter, the same as that on the two pillars near Betiya. It is now lying prostrate with part of the inscription under water. In its fall the capital was broken, and only the lower part of the bell was found attached to the shaft. This portion had been preserved by a massive copper bolt, by which the capital was attached to the shaft’’…. About the location of the site, he continued further….’’now it is evident that the inscriptions on these pillars were intended to be read by passing travellers and pilgrims proceeding along the old north road from the Ganges opposite Pataliputra to Nipal. I should therefore expect to find either another pillar, or else a rock-cut inscription, still further north somewhere in the Nipal Tarai. The Rampurwā Pillar is situated exactly on the ancient north road leading into Nipal’’.4

And, thus re-began the story of Rampurwā in the nineteenth century following several centuries into oblivion after Ashoka founded it to commemorate most significant events in the life of Buddha.

Further explorations and excavations by Daya Ram Sahni. led to the discovery of another pillar in the vicinity (the second pillar has no visible edict now as it seems to have been chiselled away), the bull and lion capitals, copper bolt, and few other artefacts. In the beginning, it was thought that the two shafts were part of same pillar but the excavations of 1907-08 proved conclusively that there were two different Ashokan Pillars, each with one animal capital in Rampurwā 5, one pillar with the bull capital and the other with the lion capital. The Bull Capital now serves as a decorative piece at the entrance of the official residence of President of India1 while the Lion Capital lies badly damaged in Indian Museum in Kolkata where it fell due to manhandling and broke into two pieces 6,7 and the two pillars removed from their original place lies prostrate in dilapidated state on the ground in Rampurwā village in Champaran.

But there is more to the reasons behind significance of Rampurwā – in addition to being the site of Lord Buddha renouncing worldly life towards the search of knowledge, Rampurwā is suggested to be the actual place where the death and parinirvana of Gautama Buddha took place (Waddell,1896). This possibly may have been the prime reason why Emperor Ashoka held this site to be uniquely sacred.

Apparently, there are other significant compelling evidences to suggest that this was the actual site of Mahāparinirvāṇa of the Buddha: two Ashokan Pillars in close proximity as mentioned by the Chinese traveller Xuanzang; both the pillars fall exactly in the same track as mentioned by the Chinese travellers Faxian and Xuanzang; there is no mention of Buddha crossing river Ganḍak in Mahāparinibbāna Sutta; and Rampurwā falls on an ancient trade route connecting Magadha, Vaiśālī with Nepāl 8,9

But why there are no traces of stūpas or temple in Rampurwā and where are the remains of city of Pāvā and Kuśinārā associated with Buddha’s parinirvana? The answers could be buried inside the deep layers of sand and earth in Rampurwā. For this, one need to conduct study and unfortunately no proper archaeological excavation has taken place at the site of Rampurwā yet. Scientific techniques like ground penetrating radar survey could immensely help answer the question conclusively.8,9

Interestingly, according to one monograph10,11, Rampurva copper bolt of Aśoka pillar, has Indus Script hypertexts (hieroglyph is a pictorial motif to signify the associated sound of the word; hypertext is a hieroglyph linked to a similar sounding word; and Indus Script is designed with hieroglyphs composed as hypertexts).

The inadequacy of evidences so far and differences in opinions of modern historians of different shades notwithstanding, the reality in front of all of us to appreciate is ‘’Emperor Ashoka himself considered Rampurwā to be the only site significant enough to erect two commemorative pillars’’. This alone should be good enough reason to declare this site as a milestone in Indian civilisation and restore the original glory as a mark of respect to both Lord Buddha and Emperor Ashoka.

Perhaps as the tallest figure in the Indian political history so far, Ashoka would have expected his descendent Indian ruler politicians to respect his feelings towards the site of Rampurwā , reverse the momentous neglect of this civilisational milestone and restore back the original glory of this sacred site as conceived by himself in the 12th year of his reign. But, unfortunately, Rampurwā is nowhere in Indian collective conscience, nor out of oblivion yet.

Author: Umesh Prasad
The author is an alumnus of the London School of Economics and a UK based former academic. The views and opinions expressed on this website are solely those of the author(s) and other contributor(s), if any.